While the first sleeve sailed along, the second one was not so fortunate.  I think I was so overconfident after my success with the first sleeve that I assumed nothing could go wrong.  I took my 2nd sleeve to a knit night with many lovely ladies in San Jose and oohed and ahhed over the cashmere.  (They were all knitting lovely things, and I was most taken with the practicality of the cashmere gaiter...when else can you say cashmere is practical? Less than one skein!)

I had goodies, I didn't even have wine, but the fine company and festivities (felting!) went to my head.  The next morning I found a slipped stitch in my cable about 23 rows down.  Yikes. 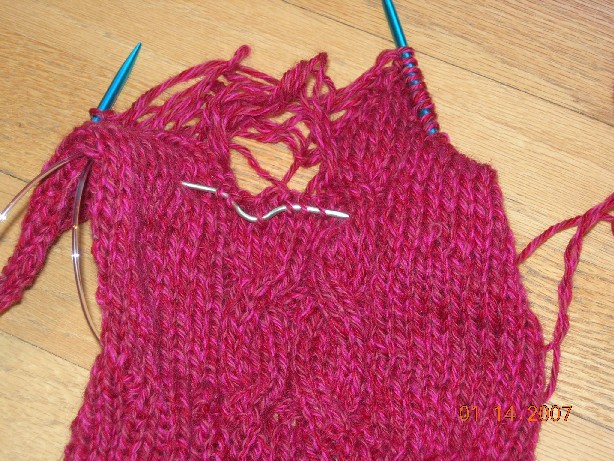 The surgery went well.  Of course, that didn't stop me from making the same dern mistake some 40 rows later.  Again with the surgery.  Heck, I spent more time operating than actually knitting this sleeve.  All is well now and it is done.  Later this week I'll tackle a front side even!

In the meantime, an FO.  It's the martini dishcloth.  Cute and fun little pattern.  Next time though, I'll try to figure out how to get a stir stick into the pattern: 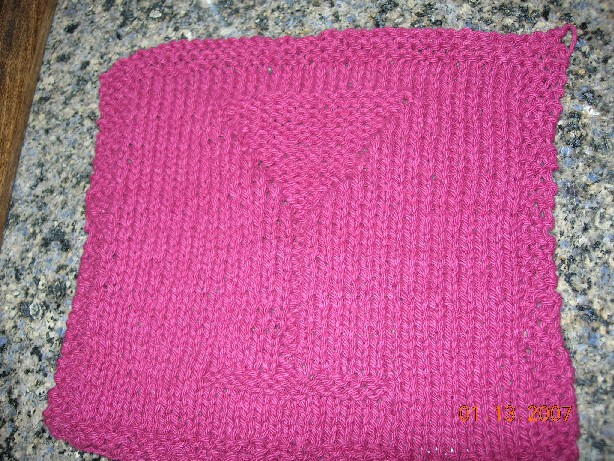 As for my Red Scarf...it is going very very slowly.  I was an idiot to knit it on size 8 needles. What was I thinking?  I am seriously considering getting some size 13's and whipping through a fun double stranded scarf to make sure I finish it in time to ship out.

Ouch!!! That surgery is painful. Glad it's over and your sleeve is finished.

All I could think was how brave you were to drop stitches on a cabled knit! I'm glad it all worked out. I love the color, btw.

The comments to this entry are closed.