I saw this on Elspeth's blog and I liked it since it had a high sci-fi/fantasy quotient.

The books you've read, the ones you might read, ***the ones of which you saw the movie, and (the ones you've never even heard of):

I am a bit embarrassed to realize how many of those I own and have been meaning to read--but still haven't!  I tag Ken and Pete.

In other knitting news, my MIL has stitched up the Childhood cardi and as soon as I get the button situation dealt with, it will be finished! 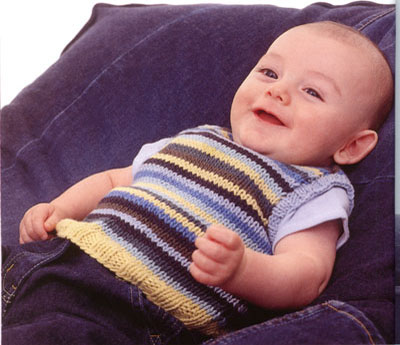 I have modified the stripe sequence because the one called for in the pattern is a 62 row sequence.  Hello?  I can barely count to 8 to load the coffee maker.  I ended up doing royal blue trim, 2 rows of red and 6 rows of light blue.  Wayyyy easier, and even then, I still would screw up occasionally and forget the sequence.